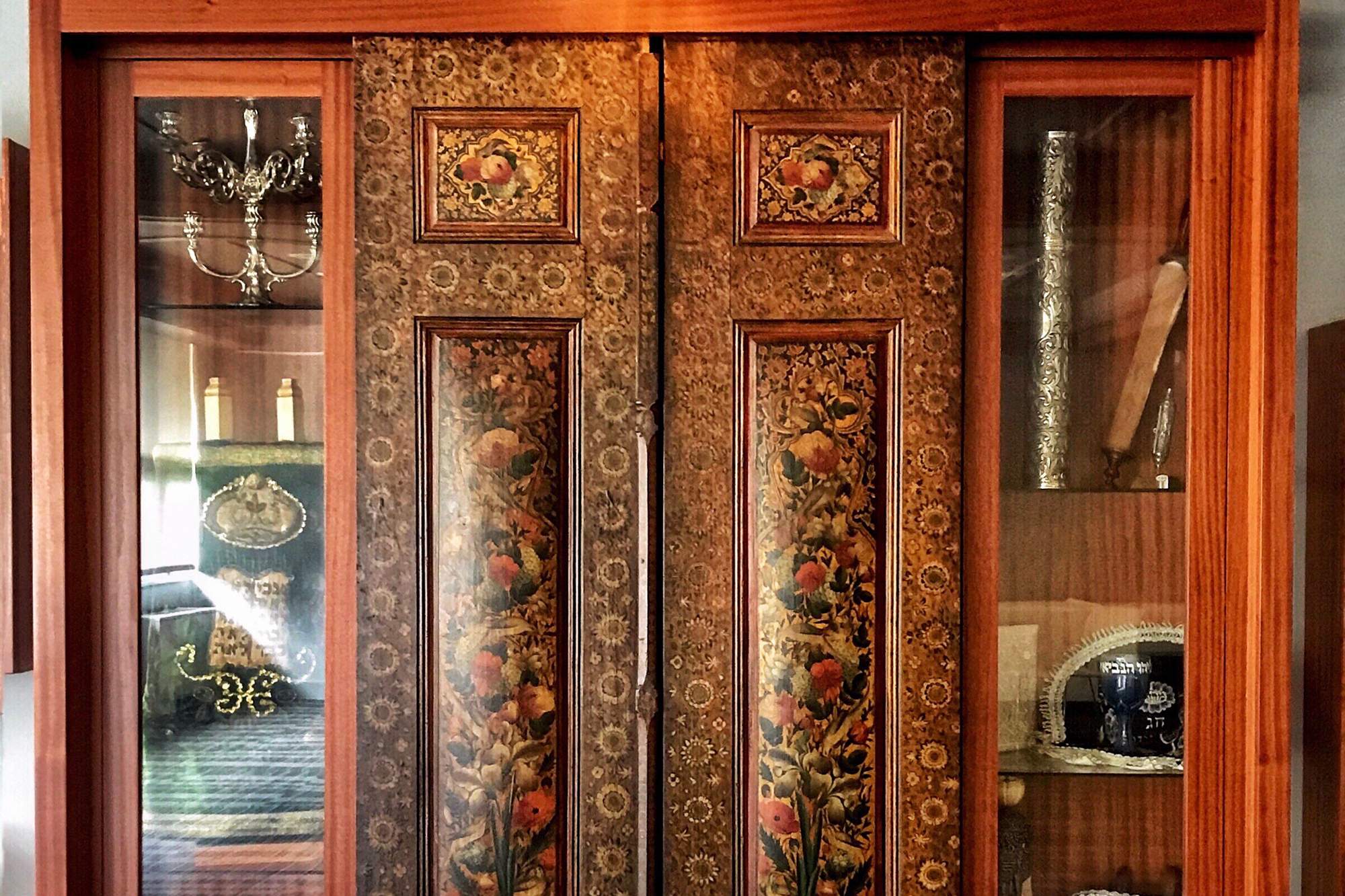 Temple Israel of New Rochelle was founded in 1908 by a small group of relatively prosperous Jewish families, mostly of German origin, who had moved from New York City to the suburb of New Rochelle. Anshe Sholom, then the only other synagogue  in New Rochelle, used an Eastern European style of Orthodox worship. The founders of Temple Israel wanted a congregation that interpreted Jewish tradition, liturgy, and rituals in a way that they perceived to be more appropriate to modern times.

From the rented rooms of an old Post Office, Temple Israel employed an orthodox Chazan as its reader and established a Religious School and Ladies Aid Society. In search of their own spiritual home, the newly formed congregation soon purchased and renovated the Holy Trinity Lutheran Church, where they erected an Ark for the Torah Scroll. In 1912, Richard M. Stern became the congregation’s first full-time resident rabbi, who oversaw increased Temple membership and Religious School enrollment, as well as the transformation of the Ladies Aid Society into the Sisterhood.

In 1923, Temple Israel joined the Union of American Hebrew Congregations (UAHC), and Rabbi Harry K. Jacobs assumed the leadership role. To support a growing congregation, ground was broken for a building on Webster Avenue in 1928. With Alvin S. Luchs as rabbi, activities were expanded to include a Men’s Club, Garden Club, Men’s Glee Club, Braille transcriptions by the Sisterhood, and the first appearance of Temple Topics (our bulletin).

Jacob K. Shankman assumed the pulpit in 1937. Under his guidance, an era of growth, enthusiasm and interest was ushered in. Bible literature, customs and ceremonies, and Jewish history became required subjects at the Religious School, and Hebrew was introduced. Temple Israel became the pre-eminent Reform congregation in Southern Westchester. However, commensurate with the impact of World War II on everyone’s lives, Rabbi Shankman took a leave of absence in 1943 to serve as a Chaplain in the U.S. Navy. Sadly, seven Temple members lost their lives while serving. In the aftermath of the war, the renewed spirit of the 1950s brought growth to the Temple, as young families flocked to Westchester County. An assistant rabbi, Charles Annes, and a permanent cantor, Sumner A. Crockett were hired.

In 1960, the cornerstone was laid for our home on Pinebrook Boulevard. In 1973, after thirty-six successful years as the leader of Temple Israel’s growing congregation, Rabbi Shankman achieved Emeritus status, and Amiel Wohl became Senior Rabbi, along with Sumner A. Crockett serving until 1980. Rabbi Wohl’s humanitarian influence brought prominence, both in the greater Westchester community and the Reform Judaism movement. He organized the Israel Action Committee, memorialized the Warsaw Ghetto uprising and the Holocaust, and drew attention to the plight of Jews in Russia. B’not Mitzvah (Bat Mitzvahs), Havdalah and S’lichot services, and modern/Sephardic pronunciation of Hebrew became part of Temple Israel’s regular rituals. Weekly Sabbath and High Holy Day broadcasts over radio station WVOX-AM, under the direction of Rita Rosen, reached out to those who were unable to attend services. Within the larger community, Rabbi Wohl gained high marks for promoting understanding among diverse religious denominations and for advancing interracial cooperation.

Helene S. Reps was appointed cantor in 1980, continuing the tradition of providing inspiring music at Temple Israel. Upon her ascent to Cantor Emerita in 1997, Cantor Alane Katzew joined the clergy, introducing contemporary, pop/folk musical elements to blend with TINR’s choral music tradition and initiating our transition to a participatory “Singing Congregation.” In 2002 Cantor Erik L. Contzius, came to Temple Israel from Congregation Keneseth Israel in Elkins Park, Pennsylvania, where he served as cantor and music director.

In July 2000, Michael Z. Cahana joined our clergy team as Senior Rabbi, and Amiel Wohl was elevated to Rabbi Emeritus. When the Cahana family moved to Portland, Oregon in 2006, Temple Israel introduced Evan Goodman as Senior Rabbi. During the following year, Beth Nichols, a graduate of the HUC Los Angeles campus, entered as Assistant Rabbi and Director of Religious Education. In 2009, we welcomed Senior Rabbi Scott B. Weiner from Manhattan’s Hebrew Tabernacle Congregation. After Rabbi Nichols was promoted to Associate Rabbi and Director of Congregational Learning, Rebecca Elkus-Ferst was hired to serve as Director of our Religious School (as of 2021, Rebecca is now Director of Education: Youth & Families).

In 2016, Cantor Randall Schloss joined the clergy team bringing a diverse set of skills. Musically, he has enhanced and broadened our environment of engaging participatory worship, through a rich blend of musical traditions, including his own compositions. He came to us after serving Congregation Ohabei Shalom in Brookline, Massachusetts for 9 years. In 2022, Cantor left Temple Israel to begin anew at Temple Isaiah in California.

Rabbi Deborah A. Hirsch was welcomed as Temple Israel’s interim rabbi on July 1, 2020. Prior to joining Temple Israel, Rabbi Hirsch was rabbi at The Village Temple. Though she is a native of Chicago, Rabbi Hirsch has spent her entire rabbinic career in the metro New York area. Previously she was senior rabbi at Congregation Shaaray Tefila, where she served as clergy for six years. We will miss Rabbi Hirsch.

In August 2021, we welcomed Rabbi Jay Rosenbaum who had previously served at Temple Israel of Lawrence for 9 years. He made Temple Israel of New Rochelle’s legacy and future bright and meaningful while he was our Rabbi! Rabbi left us in 2022 to pursue other meaningful opportunities, making impacts with many more admirers.

In July 2022, we renewed our future and worship by having Rabbi Jesse Gallop (formerly the highly successful Camp Pinebrook Director) and talented Cantor Rita Glassman, come onboard to serve the Temple Israel community.

Rabbi Jesse was a Rabbi at Beth Chaverim Reform Congregation in Ashburn, Virginia, and then Associate Rabbi at Congregation Beth Ahabah Richmond, Virginia. He “built” a summer home for over 200 children in Westchester County incorporating his Rabbinic training and skills creating the only Reform Jewish camp curriculum in our area. Being ordained at the New York campus of the Hebrew Union College-Jewish Institute of Religion, Rabbi Jesse has received his Masters in Business Administration in May 2022 from SUNY Oswego.

Cantor Rita was honored to have her original “Song For Peace/Oseh Shalom” performed at the White House for President and Michelle Obama at an interfaith holiday gathering in 2015. She firmly believes in the notion that “we are all one and responsible to one another,” and that every person who enters a synagogue is welcome “at the table,” has a voice, and is essential to the life and well being of the congregation.

We are excited for new beginnings to bring us all, Temple Israel, and the community at large, to greater spirituality.