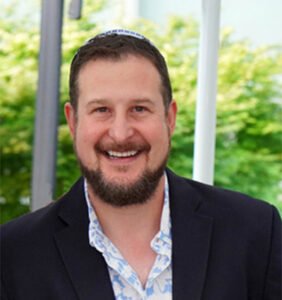 Rabbi Jesse Gallop came to our community six years ago, as the founding director of Camp Pinebrook. Rabbi Jesse built a summer home for over 200 children in Westchester County incorporating his Rabbinic training and skills creating the only Reform Jewish camp curriculum in our area.

His rabbinical calling has been to create a community using the toolboxes of our text and traditions. Rabbi Jesse has shown his commitment to partner with congregants, staff, and board members, to create a home based upon Reform Jewish ethics, care, support, and respect. “Together, we’ll create a sacred space to explore spirituality, wrestle with tradition, and strive to make the world a better place.”

Before coming to Temple Israel, Rabbi Jesse was Rabbi at Beth Chaverim Reform Congregation in Ashburn, Virginia, and then Associate Rabbi at Congregation Beth Ahabah Richmond, Virginia. He has served on community boards battling issues of homelessness and poverty and has sat on the boards of several Jewish organizations. He currently is a board member of Hillels of Westchester.

Rabbi Jesse grew up in the Minneapolis metro area. He graduated from the University of Denver with a degree in social sciences. In 2008 Rabbi Jesse was ordained at the New York campus of the Hebrew Union College-Jewish Institute of Religion. He has received his Master’s in Business Administration on May 2022 from SUNY Oswego.

Rabbi Jesse has twin sons, Holden and Parker, who attended The Kehillah School and who are now 2nd graders at Chatsworth Elementary School in Larchmont.